Welcome to Korge's Keep on the Borderland. Korge (pronounced CORG) is my other alternate persona when it comes to gaming. More like my DMing persona andn is from my very first character. Might make a post about that, but this is about me running Keep on the Borderland for the first time. I have decent experience in running OSR style games, but have never ran any of the old school modules.

This my attempt to run one of the most classic modules: Keep on the Borderland by Gary Gygax. This will also be my first attempt running a game only using Discord since I am quite tired of most Virtual Tabletops (we could had a really good one, but everyone had to crap on D&D 4th Edition, jerks). Anyways, I will be starting a journal and review of running the Keep on the Borderlands. So Welcome* and enjoy my fellow DMs, Fleshbags of HP, and mutants. 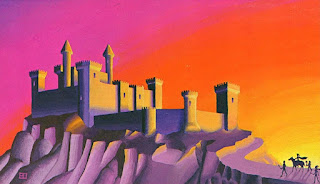 This is my entry for Session Zero(ish) and prep for the upcoming game. The first session is set to take place Nov. 24, 2020, which is tomorrow of writing this. The System we will be using is the Old School Essential books by Necrotic Gnome.  But first lets introduce what we have characters for now.
List 4: Characters and Nothing More
All in all, a good start for characters, but I have no idea for sure how well they will do in the Caves of Chaos. Half of the party only have 3 hit points each. Which is fine I guess, for me at least. Mwhahaha.
So after the confirmation of characters we had a two week wait till the first session and during this time a reread all of the OSE rules I would need and read the module from front to cover. Overall I think the campaign will go well and I am super excited like a rabid mutant raccoon. I did make some modifications to the rules and adventure.
The first is I changed the Fighter Attack Matrix to match the Monster Attack Matrix to make the Fighter a more balanced and attractive class. The second was trying to figure out what campaign world the module would fit into. I'm still working on that, but I have time to figure that out. It is toss up from Keminster, my hexcrawl, or Mystara. Unfortunately, I dont much about Mystara, so I am busy hunting down the BECMI gazetteers. The third was I needed a newer, more modern map of the caves of chaos cause my eyes bleed when I try to use the old school blue maps. I did manage to find one that was perfect, and all credit to VerySarkon for creating this map (https://rpgcartography.wordpress.com/2014/07/12/caves-of-chaos-map-redux/).

This map is invaluable to me for running this module well. It breaks down nice and neat. Even if it seems like some notes are for newer editions of D&D, the numbers are still the same from the original module. The only part left is to get ready for is using discord to run the game.
The discord portion of running Keep of the Borderlands will the be most interesting part of running the game. My plan is to run the game via voice chat every week on Tuesday. Use discord Rhythm Bot for ambience while we play and channel for dice maiden bot for all dice rolls. The last two channels will be a in-game chat for writing out response or background info and a rules resource for all rules, character sheets, house rules, and game maps and other directly game related information. I haven't played or run a lot of online games, so this will still be pretty new to me.
Hopefully, I can get the kinks out in the first couple of sessions. Wish me luck fellow gamers and mutants. Stay tuned for more Entries on Korge's Keep on the Borderland
*TO YOUR DOOM MORTALS!

Hello TTRPGers and Mutants,       Welcome to Korge's Keep on the Borderland. Korge (pronounced CORG) is my other alternate persona when...